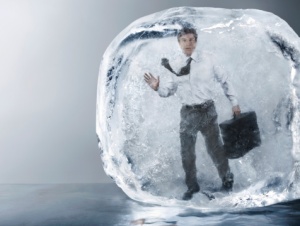 A little while back, CMSAF Wright introduced us all to the term ‘frozen middle’. There has been a lot of push to get past this in many organizations after Adam Grant’s book, Originals, revealed how middle managers are typically the ones who kill innovation. Those who recognize the dangers of losing innovative thinkers or ideas, are likely to be on the forefront of the next major initiative of senior leaders.

Problem:
Senior leaders are looking for ways to solve problems to make us better, faster, or stronger. This will allow resources to be spent more wisely and keep their organization in the lead over competitors. The ground-level workers experience problems as they are doing the work and are motivated to solve them as it will make their lives easier. They come up with some ideas to fix these problems or to make things more efficient and run it up the chain.

Here is where the issue arises. The middle. The frozen middle. Ideas are squashed or ignored before they ever gain an ounce of steam. When you consider the motivation of middle managers, it makes sense. The middle is responsible to get results and are held accountable when the numbers are not being met. Why would they want to “fix something that is not broken?” They are stretched the thinnest out of all the levels of leadership and have to wear multiple hats from administrative to operations management. They don’t have the time to explore these ideas and if they do and it fails, they are fearful of being on the chopping block.

Salt in the wound:
Many experts out there are putting the blame on those in the middle management roles. One article I found stated, “that whatever initiative top management decided the company would pursue, it would be slowed to a standstill by the unwillingness and inability of the company’s middle management team to carry it out.” True, middle managers are the ones karate-chopping the ideas and often the messenger too; however, they are not purposefully unwilling or unable. They may not be pursuing the initiative and purposefully not chasing the latest idea from the idea fairies up above, but it is because their plate is full and food is falling off as they walk.

Solution:
Two areas need to be addressed: a different perspective for senior leaders and better training for those in mid-level leadership roles.

If you are in the middle, take time to listen to your team’s ideas. Today’s Airmen are filled with ideas and want to share them. Give them some slack to explore their ideas. If they are able to help it grow legs, there might be something there worth sharing up the chain. If not, they know you care enough to let them try. Either way discuss what went right and what went wrong. You will both come out better in the long run.

Most of the time, this cycle doesn’t cost you anything except some time to hear out the idea. I would often listen to their plans and ask what the next step was. After that, I would jot a note on my calendar and follow up in the near future. There were often some really good things that came from this experience that were not part of the original plan, but some other opportunity that presented itself in the process.

To thaw this frozen middle, we can’t blame the middle. We need to create the right environment to prevent freezing in the first place.