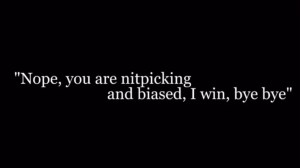 There is one message communicated over and over as I go throughout my day: I am not biased, you are. Hopefully, you see the irony in this statement just I have intended it. Regardless, each and everyone of us has seen this attitude or have thought a similar sentiment, especially recently. Over the past several years, we are more connected than ever through social media, 24-hour news cycles, and the myriad of other methods for us all to share information and opinions. On the surface, this is a great achievement; however, we all know the dangers of those who talk just to talk. Even more dangerous is the ability for us to become overloaded with opinions that feed a particular bias and this behavior carries over into our ability to lead.

We have so much anger and disgust as we read things on all of these different mediums. When these articles are crafted, they play on the biases we have towards certain things. For example, when you read the following words pay attention to what you are thinking and feeling: Donald Trump. Bernie Sanders. Gun Control. Global Warming. Vaccines. I could go on and on, but think this will help make my point. When you read each of those, an emotion was sparked and these were simply words without any context. Now, pair them with a narrative that feeds our bias.

Let’s take Donald Trump as an example. He is one of the most polarizing figures I can think of. To some he is thought of a tough leader and others as an incompetent fool. Very few see him somewhere in the middle of that spectrum. First off, it is ok to have strong opinions about him or anything else, that is normal. However, it is very important to recognize that bias because it will directly impact the manner in which you view anything about that topic.

A funny example of this is a friend of mine who works for a paper who recently posted about her anger in how others are attacking the media. Her argument was that journalists did their best to report based on the facts they have discovered. Then in the comments, someone mentioned a major news network that offers the opposite political view and she went ballistic calling them “hacks.” She failed to see the bias in her own argument. Have you ever done this though? I know I have!

There are times that I have prejudged those on my team based on his or her past experiences or things told to me by peers. I know I have based some decisions on these biases and failed to see it at the time. It broke my heart to realize I did this after the fact. However, this did help me to learn to do my best to combat this.

When it came to someone on my team, I practiced separating the person from the event. There was no one on my team who I thought was a bad or evil person; however, I did not agree with a lot of the decisions they made which led to bad outcomes. Doing this had a welcomed side effect as it opened the door for more candid feedback and several training opportunities. It is much easier to talk about an event and all those errors than it is to tell a person about all of their flaws. It is also disarming and they are much more open to growth feedback when they are not concerned with defending themselves.

We all have biases and it is ok. We all prejudge based on these biases and that is not something that can be changed easily. However, when we can learn to see our biases, we can formulate a plan to overcome it for the sake of our teams.