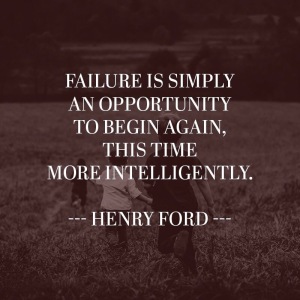 We look at failure as such a negative thing. We are so afraid of its negative stigma, we never even try sometimes. Many suffer from a failure to launch because of this fear. Although, if we keep doing the same thing and failing at it over and over again, that makes us insane not a failure. When we fail at something we can’t take it personal. Instead, we need to determine what we can learn from the situation and tweak the process for the next time we try. Never be afraid to fail; rather, your fear should be of never trying.